click the blue arrow above to listen
Essex born composer Cheryl Frances-Hoad is embarking on a commission for electric voice theatre’s Essex 2020 Minerva Scientifica project “Echoes from Essex” in collaboration with Chelmsford Civic Theatre.
Cheryl will be creating a work for 2 female voices and electronics which connects the famous concert given by Dame Nellie Melba broadcast from Marconi’s New Street Works in Chelmsford on June 15th 1920, with tests there by a local singer, Winifred Sayer earlier that year, and with Marconi’s Secret WW2 Radio Engineer Florence Attridge who was born in Chelmsford on June 14th 1901. 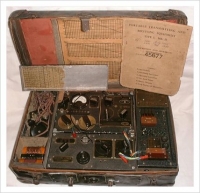 The music will be premiered on September 20th at Chelmsford Civic Theatre by electric voice theatre and was commissioned by the company using public funding by the National Lottery through Arts Council England and PRS Foundation’s The Open Fund.