You are here: Home1 / Echoes2 / Echoes from Ben Lawers

Driving alongside Loch Tay you could be forgiven for thinking that this beautiful countryside is always quiet and peaceful with its dotting of farms, and tourist stops.But just a few minutes from leaving Killin you come across an unexpected sign to THE BIG SHED – a small but very lively community hall in the tiny hamlet of Tombreck.  It was here that we continued our Minerva Scientifica Tour in September 2018 with Echoes from Ben Lawers taking it’s place among the dizzying array of events on offer.

The promoter there – Wendy Graham – helped us find two fantastic local scientists who rolled up their sleeves (normally something they would do in the fresh air!) and waded in to the workshops at two schools at either end of the loch.  SARAH WATTS, an ecologist working on Ben Lawers with the National Trust for Scotland enthused the children of P5-7 at Killin Primary School as they went on a musical journey to find the rare Snow Pearlwort. 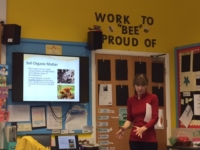 While AUDREY LITTERICK, a soil scientist who lives locally, inspired the children of P5-7 at Kenmore Primary School, to love their soil – they all brought in a wee sample from their garden to show her! – and guided them through the good and bad things to be found there.

Both schools produced their own music – Buried Treasure (Parts 1 & 2) which, in addition to presentations at both schools, came together in a performance at THE BIG SHED on September 22nd 2018.

The schools also had a visit from our science researcher, Catherine Booth who fascinated us all with tales of scientists past who had special connections with the area:-

Leonora Rintoul and Evelyn Baxter, two intrepid ornithologists who visited the estates nearby to observe the birds as they tramped across the whole of Scotland preparing their still recognised publications on birdlife.

Nora Miller, a marine biologist born nearby in Stirling, who made a special study of the Lung Fish and was a pioneer of underwater filming.

Beatrix Potter, whose work as a mycologist was sparked by her local postman in Dunkeld and Victoria Drummond, born of a Perthshire family in Errol, was the first sea going British women engineer, and a WW2 hero.

I did think of being a scientist because I enjoyed learning about all the scientists and some of the things sounds fun. (Killin Primary pupil)

Our two living scientists were also engaged on collaborations to create music about their science with composer Frances M Lynch.  “Living, Breathing Soil” reflects the work of AUDREY LITTERICK digging into the earth and revealing the health of the soil through the organisms it contains. With SARAH WATTS the process of writing the music was more complex, involving data from her transect ladders of tall herbs on Ben Lawers and the Killin Community Choir.

The notes were created directly from the data – monitoring the growth of Tall Herbs in specially created plots which prevent the sheep and deer from grazing. There were 9 ladders of these plots – so the piece is called “Sarah’s 9 Ladders of Tall Herbs”. Frances Morrison, the conductor of the choir, did a sterling job adapting this complicated score so that it would work best for the singers and they sang it brilliantly as a result. You can hear it on Sarah’s page on the Minerva Scientifica Website.