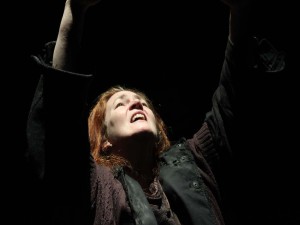 The City Weeps encapsulates the harsh reality of conflict.It highlights not only the ability of humanity both to survive invasion and devastation but also to perennially inflict the same wounds across generations and peoples. 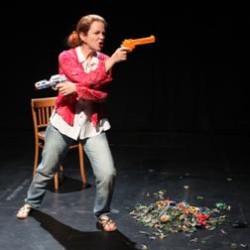 The text ‘explores a political situation that is as old as civilization and has repeated itself throughout the ages: the forceful intervention of the strong and powerful to ‘protect’ or ‘liberate’ the weak, focussing on the intervention ‘primarily from the point of view of those who endure it rather than from a philosophical perspective.’ (Viñao) 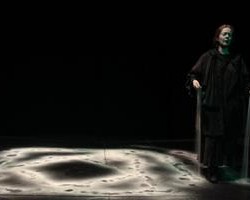 Commissioned by electric voice theatre with support from ACE, Britten-Pears Foundation and the European Association for Jewish Culture. Developed at The Junction Theatre, Cambridge.

This piece represents a culmination of work Lovett and Lynch have produced together over seven years, resulting in complex and intoxicating soundscapes that fuse electronic and acoustic voices, stretching Frances’ vocal technique to its utmost limits. The text comprises excerpts from The Book of Lamentations, ‘a sequence of five poems from the Hebrew Bible, reflecting an ancient tradition of mourning poems after the destruction of a city.’ (Lovett)

Artistic Director and Performer: Frances M Lynch
featuring the voice of David Sheppard as The Prophet 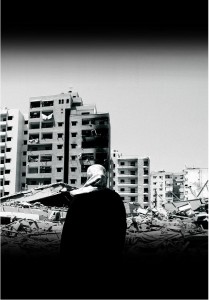 Frances M Lynch and electric voice theatre have been collaborating with composers Alejandro Viñao and Andrew Lovett for many years. The City Weeps represents new developments for all of us in vocal techniques, drama and live electronics.
Viñao produced a spoken drama, contrasting with live singing, transforming seamlessly into recorded sounds: – a marketplace, a call to prayer, TV news broadcasts, and a variety of unexpected musical styles.
Lovett pushes Lynch’s extended voice, and places it in a surround sound electronic space, peopled with unseen characters with whom she interacts. You’ll hear the voices of the sentinels appear at four corners of the devastated city in which the audience are sitting.