An Cridhe on the Isle of Coll, a tiny Island in Scotland’s Inner Hebrides, is everything it claims to be and more –  a centre for culture, interaction and warm hospitality to visitors and the local community. We were invited by the centre’s visionary manager Jane Metcalfe who also manages the Coll Bunkhouse next door where we spent a very happy week in residence. 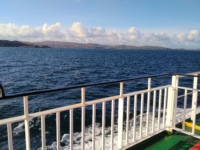 Every day we climbed the little hill to Arinagour Primary School and the promise of some very creative and joyful time with the 7 pupils in the only class! Together we created new music for the ECHOES PROJECT which we all performed at An Cridhe on September 29th 2018.

” I observed how easily and willingly pupils can compose music with just a little guidance” Mrs Sarah McCann, Head Teacher 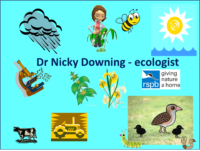 Normally our Echoes Projects involve us working with local women scientists – but in this case such a small Island could not produce a resident with these credentials. Instead we contacted ecologist Dr Nicola Downing about the RSPB Nature Reserve on Coll. She keeps up to date with conservation based science and delivers species and habitat advice to the fantastic staff that manage the RSPB’s network of nature reserves in South West Scotland, including on Coll.

She wasn’t able to visit the Island when we were there – but suggested we investigate their iconic migratory bird, the Corncrake (Crex Crex) with the help of local reserve manager Ben Jones, who gave us all some fascinating insight into the bird’s importance and the fragile eco-systems that it needs.

The Corncrake does make a deafening noise during the long summer days (and nights!) on Coll – so we called our music  “Corncrake Coll”. You can  find it on the school’s page where you can follow their scores too = just click here – Arinagour Primary School! 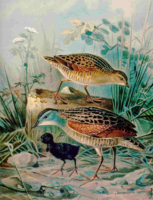 With Ben Jones we talked about corncrake and we learned the I. and O.
A pupil from Arinagour School

The children were pleased to find out that farmers on Coll are very good at maintaining the Corncrake habitat – they make I and O shapes when they harvest in the fields leaving spaces for them to move and rear their young.

They were not so pleased to find out that people used to eat Corncrakes – here’s a recipe for a roast dinner from Mrs. Beaton!

Excitingly we also discovered that Evelyn Baxter, one of two ornithologists who feature in our performance, had visited Coll herself and had written about the gradual disappearance of the bird from  Scotand – and even in 1937  she notes there were only 12 pairs recorded on the Island, so they have been rescued just in time.

We were sorry to leave the peace of the Island and continue our tour onwards and upwards in to the Highlands to find yet more Echoes from Scotland and the women whose work has led the way in science and music in our country. 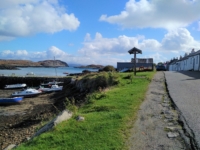 We learnt a great deal from the Island, and from the children at the school whose Head Teacher felt this was mutual…….

Pupils discovered that there are many ways of learning apart from what they would see as obvious. Singing helps memory.
They were fascinated with the recording aspect and were able to suggest how recording could be improved (moving equipment etc)