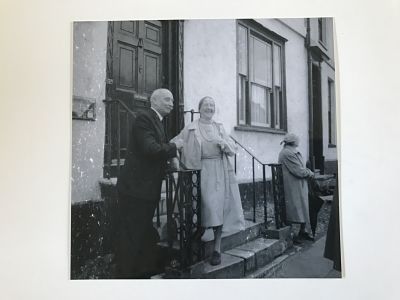 click on the blue button to listen to the PODCAST  Episode 9: Another Holst in Thaxted
“Women of Science & Music: 30 celebrations”

Imogen Holst (1907 – 1984) was influential in the development of music education and community music-making in England in the twentieth century. She was a pioneer, composing throughout her career for instruments such as brass band, pipes, recorders and hand bells, bringing these instruments into the art music or cultivated music worlds. She was one of the first women to establish herself as a conductor.

The podcast explores her life and work and connections to both Aldeburgh and the Thaxted Festival in Essex. We are grateful to Thaxted researcher Michael Goatcher whose work has greatly informed this podcast.

Performed by: – Frances M Lynch, Alice Privett (Sopranos); Simone Ibbett-Brown, Margaret Cameron (Mezzos); David Sheppard (Countertenor); Julian Stocker (Tenor); Gwion Thomas (Baritone)
These are the first recordings ever made of these works, created from recordings by the individual singers during lockdown 2020, and compiled by Clarke & Lynch at Birnam Studios, London.

We are grateful to the Holst Foundation for their permission to record these works and to Britten Pears Arts for providing the unpublished scores.