This section of the piece (finished today at 6pm!) utilises samples the singers recorded at home on Wednesday & Thursday this week, of texts from “The Animal’s World” by zoologist Doris Mackinnon (1883 – 1956), a regular BBC broadcaster, and words from ecologist Mischa Cross (Pitsford Water Nature Reserve) and Senior Ranger Debbie Samwell (Brixworth Country Park). The composer also provided a score of individual sung phrases and sounds and using these and some recordings of bat echolocation, moth wings and vintage aeroplanes (for sound credits follow the Soundcloud link above), then assembled them, a bit like a sound jigsaw puzzle, to create the music. This is the first stage in the composition which will include melody and lyrics extolling the amazing attributes of the women at Sywell in 1931……..

Part 2 will be premiered tomorrow at 7pm

On 19 September 1931, Sywell Aerodrome in Northamptonshire hosted the world’s first All Women’s Meeting. It was a huge success, and soon Southampton, Bristol and other airports were following their lead. 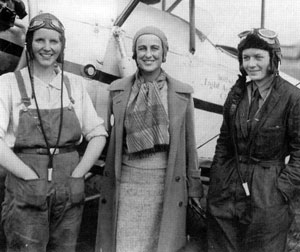 The event was the brainchild of Northampton born Molly Olney, herself a pilot and evidently a superb organiser who knew how to pull strings and attract some influential guests. Crowds flocked to the unprecedented event, which was opened by the fabulously wealthy Mary, Duchess of Bedford, who had broken several records with her long-haul flights to India and Africa. Other famous women who arrived – in their own planes, of course – included Mrs Victor Bruce, who had flown round the world, the air circus proprietors Pauline Gower and Dorothy Spicer, and the flying archaeologist Lady Mary Bailey.

The programme of all-female stunts included a parachute descent, aerobatics, flour bombing of spectators, balloon bursting and a thrilling fifteen-mile race. These genteel ladies clearly entered into the spirit of the day – a journalist reprimanded them for being over-enthusiastic, condescendingly reminding them ‘that it is better to avoid endangering other pilots, even if it means losing the race.’
Two men tried to smuggle their way in disguised as aristocratic Polish pilots – a Baroness and her niece, the Princess. After their cover was blown they were spotted escaping through a lavatory window. 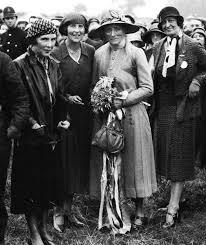 The Duchess of Bedford with Lady Mary Bailey

One of the pilots, Dorothy Spicer (1908 -1946) was the first woman to gain the top D license in aircraft engineering and the only woman in the whole of the British Empire to hold a technical post in civil aviation. She died tragically young when flying with her husband as passengers on a scheduled flight to South America. You can read more about this exceptional engineer on the Dorothy Spicer Minerva Scientifica Webpage.
Tomorrow we will tell you about some of the other lady pilots who took part that day, whose stories will surprise and astonish you!

Come back at 7pm tomorrow for the premiere of
“Bats, Moths and Bi-planes – Part 2”
by Frances M Lynch
(supported by PRS Foundation’s The Open Fund)
for voices, vintage plane engines, moth wings and bat echolocation